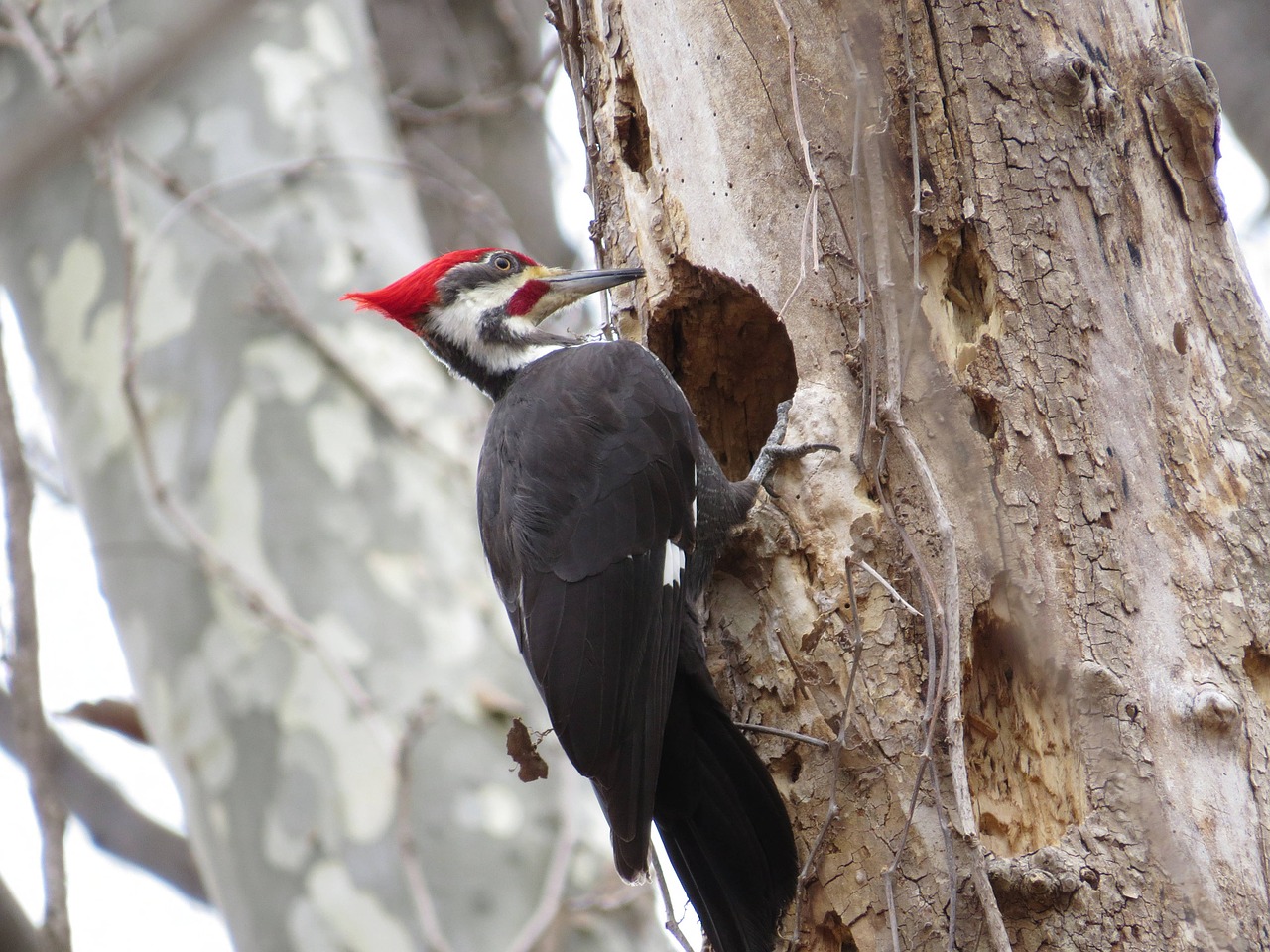 See another picture of this magnificent bird and hear its raucous call and characteristic drumming.

The Henson Trail runs from Alderton Road to Dewey Road through one of the most densely populated areas in Montgomery County. It crosses Layhill Road, Georgia Avenue, Connecticut Avenue, and Viers Mill Road. It honors the African-American Arctic explorer Matthew Henson, a native of Maryland. Surrounding the trail on either side is a strip of forested area about 500 feet wide.
Human habitation is visible on both sides. Nonetheless, in this small green space among the suburban sprawl I had the pleasure of viewing a pileated woodpecker hard at work pecking a large opening in the top end of a dead tree. If you've seen one, you will know it by its relatively large size, red crest and black and white face markings.

Among woodpeckers, the pileated woodpecker is second only in size to the ivory-billed woodpecker, although the ivory-billed is believed by many to be extinct. They inhabit forests of mature trees but will also reside in smaller wooded lots as long as tall, old-growth trees are present. This would be the reason for its presence along the Henson Trail, which winds among stands of grand, old trees.

Other wildlife is visible along the Henson; there are more varieties of woodpeckers, several kinds of hawks, a multitude of other birds, including the eastern bluebird, foxes, deer, turtles, snakes, frogs and more. I haven't walked the trail in the dark of night, but I wouldn't be surprised to see several species of owls and nocturnal mammals in the area.

It goes to show us that a mere 500-foot- wide green space even in such densely populated zones of our county as Aspen Hill can still serve as a welcoming habitat for a wide variety of great creatures. Maybe infilling the few remaining green spaces that dot the urban corridors of Montgomery County is a misguided development strategy. It's better for our native wildlife to leave some undisturbed green space -- it doesn't have to be large. Even small areas can suffice, especially if they serve as corridors between larger habitats.

Habitat loss and fragmentation of habitat are two of the main factors causing the loss of species and biodiversity. Montgomery County planners need to keep this in mind as they consider approving increased development of the landscape. It is imperative to maintain the native habitat and to ensure that there are corridors connecting large areas such as Rock Creek Park and the less densely inhabited parts of the county.