Mass-Produced Chicken and the Environment 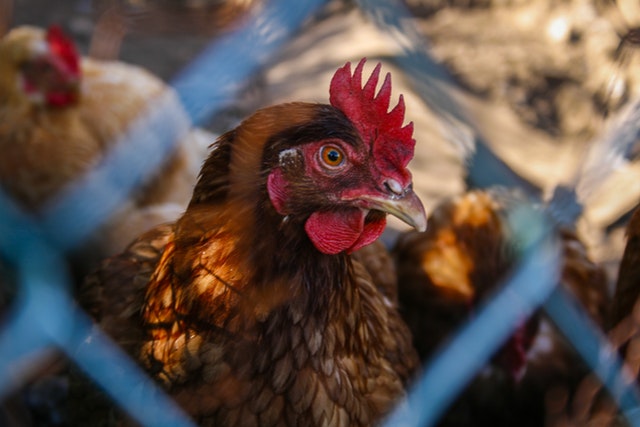 It has been estimated that agriculture contributes about 14% of the greenhouse gas emissions currently pouring into the air. And 7% of that is from manure, especially from large industrial animal farming operations. Animal waste also has a deleterious effect on our water. The importance of these facts came to mind because a new fast-food restaurant has opened in Olney, Maryland.

I won't name names, but its main menu item is chicken. We already have 31 outlets that sell prepared foods, including chicken, at the intersection of 108 and Georgia Avenue in Olney, Maryland, but Montgomery County Planners felt we could use one more. Mind you, one of every 20 American children is obese, not just overweight, but obese by the age of 19, according to the Centers for Disease Control and Prevention. And the menu at this joint is also heavy on items that diabetics should not eat, like refined white flour and potatoes. The CDC offers many sobering facts about the diabetes epidemic in the U.S. but I like this one, "[in] the last 20 years, the number of adults diagnosed with diabetes has more than tripled as the American population has aged and become more overweight or obese."

Nothing to "Cluck" About

But what about the environmental impact of mass production of fast-food and grocery-store chicken? Does the fact that frying chickens that might be raised without antibiotics and egg-producing chickens raised cage-free solve all the problems? I don't want to put you off your chicken, or your eggs, but prepare yourself. And remember that it's not what they do say, but what they don't, that often tells you something.

It was the advent of refrigeration that made widespread transportation of chicken possible and increased consumption of the humble bird. Then the discovery of vitamin D made it possible for chickens to be raised indoors year-round; before that, chicken production was seasonal and outdoors. The growth of today's fowl is managed by artificial daylight supplementation. Artificial light cycles are also used to stimulate egg production. There may be anywhere from 25,000 to 124,999 chickens in a modern facility, called a "Concentrated Animal Feeding Operation" or "CAFO" by the EPA. They don't put that phrase on the menu, do they?

So How Does This Impact the Environment?

If you are thinking that the facility named a "CAFO" might not be good for the air, soil and water, you would be correct. These are facilities where anywhere from 25,000 to 124,999 chickens are raised at a time for slaughter and delivery to grocery stores and fast-food franchises. Some egg-laying operations house up to 1,000,000 chickens in one location. Yes, that's one million.

The main problem, and it affects the air, water and soil, is the amount of manure produced. It is much more manure than can easily be disposed of or used as fertilizer in fields. The manure ends up mixed with water and stored in huge open-air lagoons. You can imagine that living near these lagoons is not pleasant. They emanate the odor of manure for miles and miles.

From these lagoons, manure can leach into ground water and become run-off. Or, it gets sprayed on fields as fertilizer, but often too much of it is used, so it too becomes run-off that ends up in rivers, streams, lakes, and oceans. It feeds the growth of aquatic plants which choke the life out of bodies of water. It feeds algae blooms which can produce dangerous toxins.

Imagine that chickens and their eggs were once luxury products. Chickens were raised on family farms in small flocks primarily for their eggs until about 1960. Hens fed themselves through foraging around the farm mostly. The supply of eggs was less than the demand, so eggs were expensive. Chicken was a treat reserved for Sunday dinner and it was shipped from farms live or on ice.

You can find farms that will deliver chicken produced in a manner closer to the way it was done before the advent of refrigeration, artificial light, vitamin D, and CAFOs. It probably tastes better and it is kinder to the environment and to chickens as well. It feeds the CAFO-based meat production system to buy chicken from fast-food outlets. More about the production of meat on CAFOs to come.

chicken environment montgomery county chick-fil-a
Please check your e-mail for a link to activate your account.

Tony Puca commented on Mass-Produced Chicken and the Environment 2018-03-13 13:47:40 -0400
All chicken operations should have anaerobic digesters as they will convert all their waste and biomas into either clean electricity of mulch. This keeps the watse out of our water streams and bay and greatly reduces Green House Admissions. New York State has programs that provide all farmers with grants to use this conversion to make eletricity. Bootom line is all waste is taken out of the environment and made into clean energy that is a product. Hal Ginsberg commented on Mass-Produced Chicken and the Environment 2018-01-04 08:58:09 -0500
Thanks Susan. Another great post. It’s really tough for hard-working folks who are looking for inexpensive option meal options when they don’t want to or lack the time to shop and cook a healthy and delicious meal at home. To the extent possible, dining at locally-owned and operated restaurants, as opposed to chains, is better for our economy and the environment. Asian and Latin restaurants often offer much tastier meals at only slightly higher prices. Vegetarian/vegan options can help keep cost and calories down. Finally, please don’t forget to leave a generous gratuity for your server.